Warning: session_start(): Cannot start session when headers already sent in /homepages/20/d638395615/htdocs/wp-content/themes/photography/header.php on line 11
 The Love Story. 2 – Gabrielle Watson Photography 
Warning: count(): Parameter must be an array or an object that implements Countable in /homepages/20/d638395615/htdocs/wp-includes/post-template.php on line 284

It was the last huzzah. The boys were over. We had company over to lunch today. Mama made delicious hot spoon rolls. Daddy had to stay home from church so mama stayed with him. By the time we got home daddy was feeling better, but he stayed in his corner chair in the living room to eat. We told him we missed him at the table and the table was very merry indeed today. Tonight Chris and Abe were still here, so we read poetry by the fire, lying around it and ate leftovers from the day’s feast of roast and rolls and cheese. Chris teased me about JBW and consulted Abrum (who was lying on my bed reading) on what they brothers might do to contribute.”

“We find ourselves in a very interesting situation,” Chris said with a twinkle and a smile playing at the tips of his mouth. That worried me.

“Oh, Chris, don’t you boys do anything embarrassing.” At this he burst into a laugh and said with a Not Very Remorseful Grin,

“I’m not! Truly! I’m serious! We do find ourselves in a very interesting situation. Our sister may be interested in a guy  who – though I don’t know much about him- from all I’ve heard, like him a lot. Now, what could we as brothers do to Enhance The Situation?” He was laughing, but serious, and shook the foot of Abraham who was lying on my bed, meditating on a book. Abrum stirred a little and lowered the book to where I could just see a crinkle in his eyes and mouth  between the web of a beard concealing it. The boys threw out a few wild ideas hinting at Seven Brides for Seven Brothers type capture and interrogation. But in the end they settled for letting Mr. JBW alone – saving a little investigational conversation when they got the chance.

The Last Huzzah of Christmas festivities wound to a ‘shining, golden blur’ and then a carload of us kids loaded up and drove to Memphis.

Call it primping or ‘slathering on war paint’, as the boys call it, but I was in the bathroom getting ready for church when, glancing out the window, I saw the parking lot of the church and a Texan Getting Out of the Car. You know what happened – yep. That stomach drop and butterflies. I blushed, because I always blush when I can’t help it. Added to my already nervousness of seeing JBW I had a nice red tomato of a face to greet him with.

He was standing at the back of the church, tall, with sandy brown hair and a smile that crept from his eyes to the his lips spreading into a good natured grin. It had been a couple of years since I’d seen him and the last conversation I’d had with him in person was no shining one on my record. He asked how often we went to Memphis, and I replied casually that we might go ‘once every moth or twice every two months’… At which he chuckled and shook his head, and I tried to figure out why. Also, when telling a group of us how in his work he inspected a corn flour plant, the vision immediately coming to mind was John Barrett standing in a field of beautiful blue corn flowers with the sun shining and him intensely inspecting the flowers with a straw hat and magnifying glass. My reply must have conveyed my enthusiasm and curiosity for such a job, because he – and the group -found my interpretation Oh So Funny, and – could they just say it? A little blonde.

And now, here he was at the New Year’s church meeting in Memphis, TN. (Church meetings may or may not be an avenue of checking out potential court’n material. But hey – where better to find a good fellow or gal?)  As the congregation sang I could catch a glimpse of his pew – well, his boots, under the pew. My! he was tall – you could just tell by the breadth of space from boot to boot.  And those boots were fine. And that profile – the one I could see between heads  now and then – Wow. When it was time to go home for the night, there was the usual “AhH! Hey!” Screams and hugs of familiar faces and hearts, people were talking in crammed circles and children dashing everywhere. I was moving toward the door when – bam. Stomach plummets because he’s standing right there in my path, with a friendly smile and handshake. We might have talked 5 minutes, but we talked. Every word I might have thought about to say, and every question I wanted to ask disappeared like mice at a cat. But we talked. And he laughed, about something – this time I thought, at something truly funny. The next day, we talked some more. In fact, nearly all of Saturday’s free time was spent talking.  Our first unofficial date was to Jerry’s Sno Cones. He took me, my kid sister and another friend. They rode in the back seat, giggling and whispering about the Awkward Situation.

“Sure!” I dished up a spoon and held it out. I expected him to take it with his free hand, while he, on the other hand, thought I meant to feed it to him, and not wanting to insult me, dutifully took the bite from the spoon I held out. At this, a fresh burst of giggles resounded from the backseat and – I’m sorry to say, but if crimson ever colored up a face, mine was it at that moment. I couldn’t brush off the wide eyes and speechlessness. All I could do was wonder if I’d done something terribly scandalous and what the ladies of the church would say if they found out…”spooning sno cone to him on the first unofficial date!…unthinkable…” He masterfully changed the tempo of the Moment Suspended In Time, by showing us his automated car options where you could simply speak to the car and it would play music or go 100 miles per hour…maybe not the last one, but we tried to make it do so.

Saturday night of a meeting you always get a sinking feeling. It’s the last night to be surrounded on every side by God’s people and messages 3 times a day, feeling safe and spiritually charged in the way you experience when drenching yourself in that atmosphere. It’s the last night for friends and socializing.  And it’s the last night to take a stab at talking to the guy or girl you’ve had your eye on. I had that sinking feeling, especially since I knew I’d not see him for a while – months? A year? Two years? Who knew. But before saying goodbye, he found me. 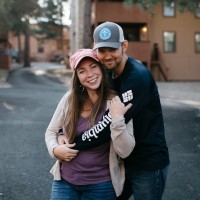 Ahh!!! What a cliffhanger, Gabe!

This is adorable. I can’t wait to read the next installment.